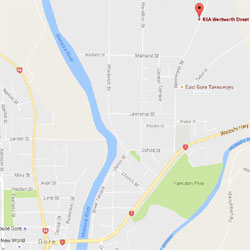 The Mataura River flows in a southerly direction for 245 kms, from its source high up in the Eyre mountains near the southern end of Lake Wakatipu, the lake that New Zealand’s adventure capital Queenstown is built beside. It reaches the sea at Fortrose, which was an early European Whaling Station from 1834 to 1836. This coastline near Fortrose is part of the Southern Scenic Route through the Catlins region.

The river flows close to several small villages and towns, including Garston, Athol, Lumsden and Riversdale, until it passes through the township of Gore where Flyfish Mataura is based, then on through the small towns of Mataura and Wyndham to the coast. This makes Gore the place to stay, with most of the Mataura River and more than 25 other rivers and streams, within one hours drive.

Gore is named after Colonel Thomas Gore-Brown, Governor of New Zealand from 1855 to 1861. It is a lovely rural town with a population of around 10,000, with good shopping and a very strong Arts Culture. In short the ideal spot with all amenities handy and with plenty of interesting options for non fishing partners.

The Mataura River and its tributaries hold Brown Trout, no Rainbows. There are no stocked trout, this is a 100% wild fishery. Average size is 2 and a half to 3 and a half pounds with the occasional fish tipping the scales well above these weights. Every year there are a few 10 pound fish caught but these are the exception.

For most of its journey to the coast, the Mataura River is a virtual series of ripples, glides and pools. It has easy access - in most cases we can drive to within 50 to 100 metres of the river. There are large stretches of shallow rippled water making relatively easy wading and no need to walk long distances between fish.

The Mataura River has the best Match the Hatch fishing in New Zealand and arguably in the world. Mayflies make up a large part of the local trout diet, with the most common Mataura species being Deleatidiums. It is one of the smallest and most common Mayflies in New Zealand. The Nymphs are small and brown, about 1cm in length, while the Duns are chestnut brown or brown/grey. We Match the Hatch with #16 or #18 Nymphs and dries. Late in the season we may even go down to #20.

The Mataura has huge numbers of Mayfly Nymphs in comparison to most New Zealand rivers and this ensures great hatches, the trick being to figure out whether it’s Emergers, Duns or Spinners that the fish are taking. Good hatches often appear from early morning – 8 to 9 a.m. and sporadically throughout the day. There is also a massive population of Net Building Caddis. For a bit of heart pounding excitement, watch your #12 Goddards Caddis get smashed by a hard fighting, strong Mataura Brown.

The Waikaia River is the main tributary of the Mataura and it also offers great fishing as does the Waimea, Otamita, Mimihau and Mokoreta rivers to name just a few of the many smaller streams that are close by. I also regularly fish the Waipahi River, where New Zealand’s oldest fishing competition, “The Waipahi Gold Medal” is held every November.

The Waipahi is a tributary of the Pomahaka River, one of my favourite rivers to fish and only 30 minutes drive from Gore. The Pomahaka has a good population of large Brown Trout, with Sea Run Browns arriving from the Clutha River in mid summer.

West of Gore is the Oreti River which runs 130 kms North to South, entering the sea near the city of Invercargill. The middle and upper reaches have excellent fishing with the upper Oreti River noted for its big fish, however this section is best suited to experienced fishermen as these fish get a lot of pressure in mid summer and are extremely wily.

If you wish to chase Rainbows, then the Upukerora, Whitestone, Mararoa and Waiau Rivers are a pleasant drive of 90 minutes through Northern Southland. All these rivers also offer great summer and autumn fishing.

The Province of Southland lies between 45 and 47 degrees south, this gives us long daylight hours – from 5 a.m. to 10 p.m. in midsummer.